Last Saturday, I had the pleasure to shoot a movie for a friend (more on this in another post). Since we were shooting for the Kino Kabaret (kind of a film festival), we had access to a lot of sponsored gear which is how I managed to put my hands on the  Shape WLB Composite. I already talked about the Sumo a while ago, the composite is its big brother. 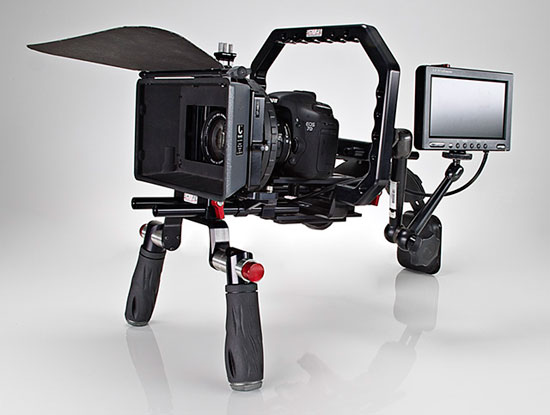 The best part about this rig is the quick handle system. Simply put, they are the best handles I have used on a HDSLR rig. Contrary to those on the old Sumo which had a bit of slack, once set, these handles wont move at all. If you want to change their angle, simply press the red button at the end of the handle and adjust them to the desired position and you are set. If it takes you more than 3 seconds, you are slow.

The next improvement over the Sumo are the multiple adjustment knobs. Contrary to the Sumo which is built in a straight line, the composite can off-set the camera to the side which make it much easier to use my Z-Finder. Every single part of the rig can be adjusted using either red levers (almost as good as those from Zacuto) or black knob. While it can take a few tries to find the perfect adjustment, once you found it, the rig is both comfortable and super stable.

The rig was given to me already assembled and looking at the assembly plan, I am glad it was. Contrary to the Zacuto Striker and other small HDSLR rigs which can be setup in less than 2 minutes, the Composite takes some time to assemble and requires tools. Nothing serious when you are aware of it but it could cause some issues if you are in the middle of nowhere and need to make an adjustment.

The only issue we had with the rig was the #$%#% camera plate. I am used to work with the Manfrotto plate system. They are pretty much the standard in photography/videography so I was surprised to see Shape using a different kind of triangle shaped plate. This plate caused us a few issues: first we had to figure out how to remove it from the holder (not as easy as it sounds, some blood was spilled) then we had to used a screw driver to attach it to the camera. This is for me the biggest problem: you dont want to have to use a screw driver every time you want to attach/remove your camera from the rig. It is another piece of gear to keep track of which can get lost and it slows down the shooting. That being said, the plate system is very sturdy and I was never afraid about the camera falling off the rig.

Finally, the rig is priced in the upper end of the market segment. At about 1500$, it is expensive but one has to realize that compared to toys rigs like the RRM Nano series, this is a pro level rig. It will outlast every other piece of gear you own. At least, it feels like it would.

Like I said in my initial review of the Sumo, this rig is perfect for everyone but the traveling videographer (who needs something more compact). It is stable, comfortable, extremely durable, comes with everything you need out of the box and will fit pretty much every physiognomy. If it was not for the tool requirements, I would have given it a perfect score.

Note: I am really sorry about the pictures. We were so busy on the day of the shoot that I totally forgot to take pictures of the rig so I had to use Shape promo pics.

Gear discussed in this review

Photography allows me to be what I want to be, to be where I want to be, and to do what I want to do ... I'm not professional photographer and I don't need a title, I love to take photographs and that is what I do, I love to learn and I always try to do it better ...
@canon5dtips
Previous DIY slider: Igus is looking at the market more seriously
Next iPad light painting = cool!

Get the Most from your Canon Rebel T5i (700D) DSLR Camera

With the T5i out, many owners don't use all the advanced features of their brand new DSLR. Nowadays, with the reasonable prices of basic photography equipment, it is not strange to see at a wedding or other events, many people taking photos with DSLRs, but many still don't understand beyond the basics.